MahÃ© de Labourdonnais, French governor of the island – which was called Ã®le de France at the time – developed and industrialised the economy of Mauritius. The Domaine de La Villebague, in the village of Pamplemousses, was home to the first sugar mill of the island in 1740. Soon afterwards, in 1742, the first rum distillery saw the light of day. It is Pierre Charles Harel, born in 1806, who then endeavoured to considerably improve distillation techniques and the entire legal framework surrounding this activity. The Domaine de Villebague is still the property of his heirs, who founded the company GRAYS INC LTD. They sustain the tradition and make New Grove rum, whichâs exclusivity is nestled in the heart of the land that once hosted the first and only distillery and sugar mill of the East India Company era.

Grays is still a family business, and is listed on the Mauritius Stock Exchange since 1989. Grays is considered the pioneer of distillation in Mauritius. The company produces around 7 million litres of pure alcohol yearly. Its daily production capacity is around 30,000 litres. The distillery regulates and operates all processes during the production of rum, making New Grove a true Single Estate Brand. 16.000 hectares of land are dedicated to sugar cane fields, which are typically harvested from June to December and brought to the sugar cane mill. The Sugar cane mill produces only natural/raw specialty sugars out of 12 different types of sugar cane, and molasses. (No added sulphur as for white sugar production). The finest canes are selected from the best plots of the Domaine to produce the essential element in the concoction of our traditional rum: molasses.

New Grove rums are mainly produced during the âcoldâ season (June, July, and August) with freshly produced unsulphured molasses and New Grove’s own home-grown yeast for fermentation. The molasses wash (also called Wine) recovered from the 30 hours of fermentation go through a wine preheater before going through a degassing column to eliminate unwanted compounds. It will then go through the distillation column (20 trays with copper valves) and to a rectification column (17 trays with bubbling cups) where 8 pipes will collect aromatic compounds and eliminate unwanted ones. The phlegm is collected on the reflux of the rectification column and has alcoholic strength 94% Vol. This distillation process allows to vary with the amount of congeners* according to the final rums type: Light (100-120 g/Hl), Â Full Bodied (250-300 g/Hl), and Heavy (300-400 g/Hl).

For the aging of rum New Grove uses different French oak barrels, varying from 170 – 400 litres in size. All barrels are filled at 65% Vol.Â  The final rums only contain rum and water; no sugar, no ageing agents, no colourant or other additives are being used. Rums are not chill-filtered to preserve natural aromas: only K12 paper filter is used (retention rate 0.8 microns & thickness 0.15 mm) â residual sediment may be found
and rums may turn cloudy when stored in a cool place. 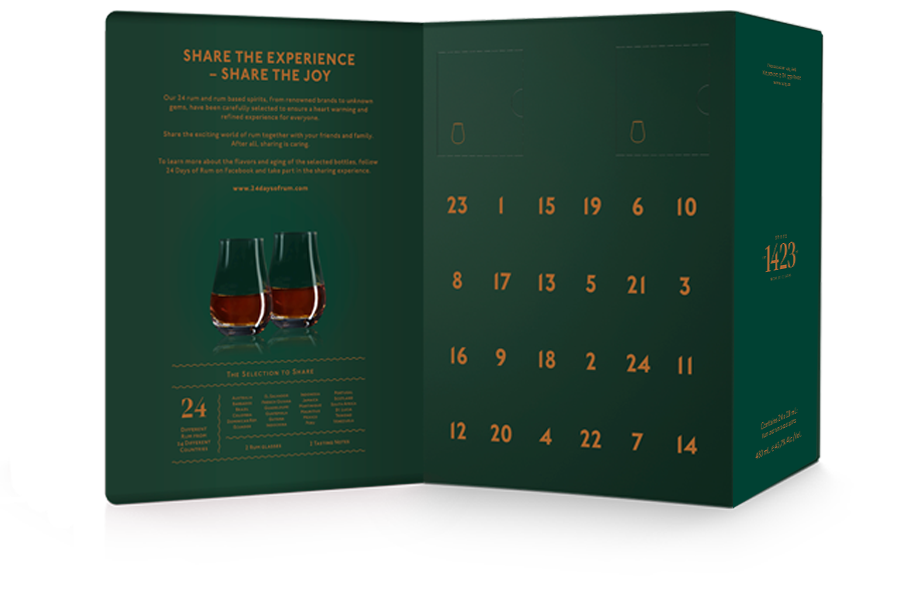 Donât want to miss the sale start next year?

Subscribe to be the first one to hear about all new and exciting 24 DAYS OF RUM 2021 calendar!

By using this site you agree to use of cookies for analytics and personalized content. Read more